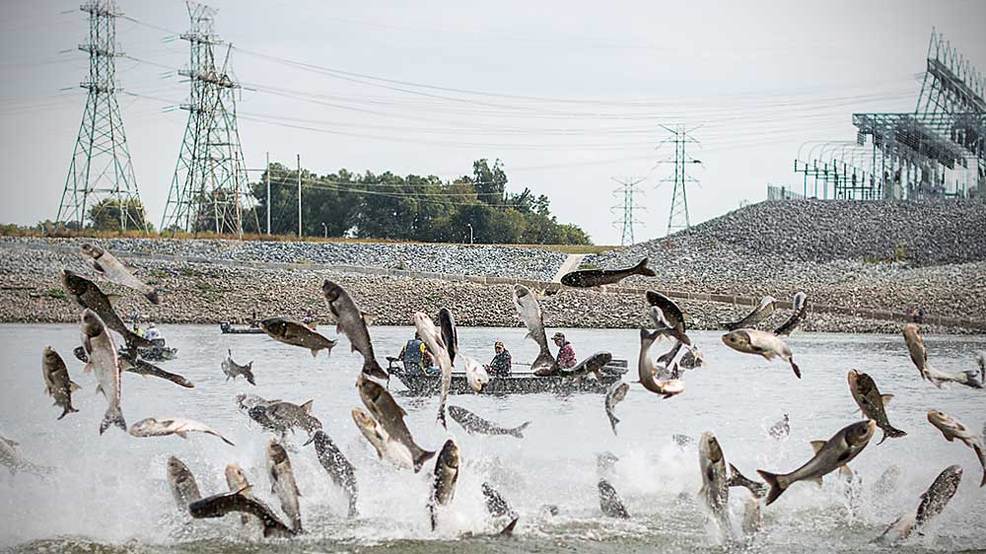 Lots of people have seen the videos of Asian carp leaping from the water when they are cornered or frightened by passing boats. TWRA biologists say they exotic carp accidentally introduced in the United States are making their way toward East Tennessee waters. (Photo courtesy TWRA)

On Friday the Tennessee Wildlife Resources Agency is holding a special news conference in hopes of informing, or alerting the Chattanooga-area public to a new invader threatening the East Tennessee portion of the Tennessee River. Evidence of Asian carp has been found in Chickamauga Lake. It is minute evidence, but evidence all the same.

When Asian carp first began popping up (pun intending) in YouTube videos 10 or 15 years ago everyone thought it was funny.

Those are the videos where you see hundreds of huge fishing leaping from the water as a boat passes by, sometimes actually jumping into the boat or even slamming into boat passengers.

In time, however, biologists became concerned. Asian carp were brought to the United States to be raised in artificial holding ponds to be raised and sold commercially. There are four species including bighead carp, silver carp, black carp and grass carp. All are from the Yangtze and Amur River systems in China. As so often happens floods came allowing the carp to escape into the Mississippi River. Habitat conditions were such that the fish could spawn successfully and they soon began spreading into every major waterway feeding into the Mississippi River, including our own Tennessee River.

Obviously the lower reaches, Kentucky Lake, was the first to be impacted. There are five TVA dams in between Kentucky Lake and Chickamauga Lake but it's clear the exotic Asian carp are working their way upstream.

"Silver carp (one of four Asian carp species) have actually been observed near Decatur, Ala. in Wheeler Reservoir," said TWRA Chief of Fisheries, Frank Fiss.

Fiss said, "And In April they took 50 samples below Watts Bar Dam (Chickamauga Lake) and one of those 50 samples was positive for bighead carp."

Fiss is not overly surprised or concerned about that, yet.

"The fact that they only got one hit out of 50, plus they took samples from the lower part of Chickamauga and they were all clean... that suggests to me that there's probably very few fish that have migrated up that far," he said.

He added that individual bighead carp often migrate upstream. In fact a world record bighead carp was caught by a fisherman below Nickajack Dam in 2005.

But the silver carp spotted in Wheeler Reservoir are more concerning because they tend to travel in mass quantities.

"The important thing is that we want to let people know how this is playing out in West Tennessee and what it means to East Tennessee," said Fiss. "What we're doing on Kentucky Lake and what Kentucky is doing in their part of the [Tennessee] River is all benefiting East Tennessee. Reducing those populations reduces that spillover effect. That's the hope right now."

TWRA is also working with the U.S. Fish & Wildlife Service on an experimental effort to test "acoustic barriers" that might actually repel Asian carp, preventing their upstream migration through the locks at TVA dams.

"If that is effective we'll be looking for funding to try and repeat that success on the leading edge of this invasion on the Tennessee River," said Fiss, who added that they hope to have results of that effort by Spring of 2019.

But when you see those videos of Asian carp leaping from the water and smacking someone in the head, don't laugh. Fiss and other biologists are just hoping they can keep such scenes from making their way to East Tennessee.