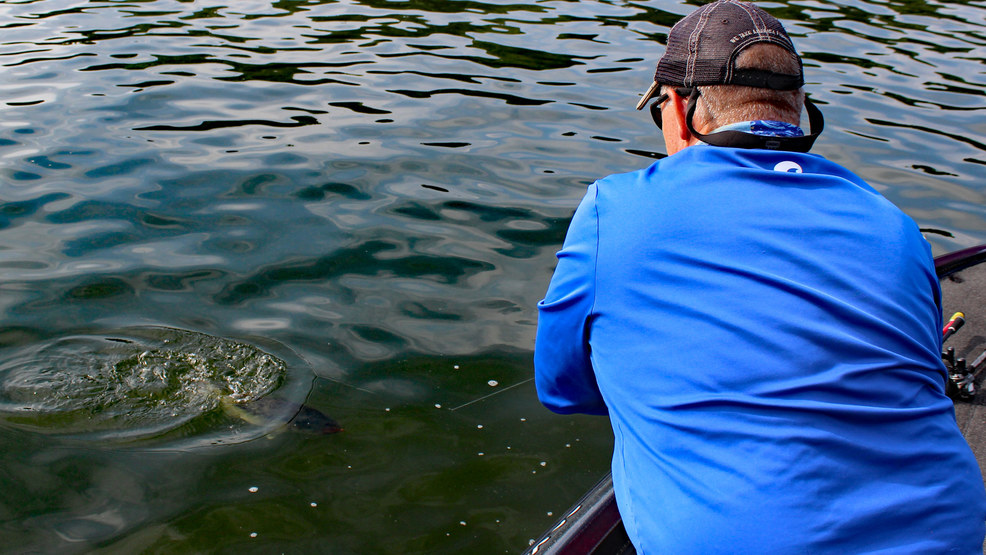 Hundreds of bass anglers are prowling Chickamauga Lake right now hoping to catch the biggest bass that would be worth $45,000 in prizes. It is just one of a continuing parade of bass tournaments on the lake and some anglers believe there can be too much of a good thing. (Photo: Richard Simms)

Talk to some area bass fishermen and they will tell you that Chickamauga Lake will soon be a "dead zone" for bass fishing. Talk to others and they insist that "The Chick" is, and will remain, a bass fishing mecca for year or decades to come.

Ranked as one of the best bass fishing lakes in the nation, there has been some sort of major bass tournament on Chickamauga Lake every weekend since the first of March, on many weekends, more than one.

As this is being written more than 700 bass fishermen are prowling Chickamauga Lake in the Big Bass Tour (May 17-19). Next week (May 23-25) the Bassmaster Open Series will be held. Following that:

And again, those are just the big ones. It doesn't count all the smaller local tournaments that occur on a weekly basis.

Most of the major tournaments have been recruited and hosted by FishDayton.com, part of the Rhea County Economic and Community Development.

"Rhea County is classified as a federally-distressed county," said Dennis Tumlin, with RheaECD and the brainchild behind the incredibly successful FishDayton.com marketing effort. "That means we are in the bottom ten-percent in the entire nation. We recognized that we have limited opportunities for growth and tourism is one area we can grow."

They have clearly done that, so much so that the Chattanooga Convention & Visitors Bureau recognized its worth and recently teamed up with Tumlin in a partnership to promote bass fishing in the area. Chattanooga CVB has developed its own website, FishLakeChick.com.

"They provided us with $30,000 of a $150,000 budget," said Tumlin. "Without their support the upcoming Bassmaster Open tournament absolutely would not have happened."

While there has been very little visible effort by the Chattanooga CVB so far, many anglers are happy to hear they are trying to get in the game.

On the other hand, some bass anglers will be just as perturbed about that as they are at FishDayton.com. On Facebook one man from Rhea County recently said to Tumlin, "For the love of God, if you are wanting Rhea County to be the Dollywood of fishing, please stop."

Tumlin is fisherman. He understands the sentiment.

"TWRA biologists tell me that so far they are seeing no ill effects from the tournament pressure on the lake. We try hard to be good stewards," he said. "We never promote or encourage tournaments in the summer when bass mortality can be high. And for what it's worth, this year was sort of the perfect storm for us. I don't see nearly as many tournaments coming to Dayton next year as we've had this year."

It doesn't mean he's still not shooting for the moon. Tumlin hopes the new partnership with Chattanooga tourism folks will ultimately lead to even higher profile tournaments in the area - events that Dayton simply isn't equipped to handle on its own right now.

It is not too late to register.

Go here to see the current results of the Big Bass Tour.

The final championship weigh-in on Day 3 (May 25) of next week's Bassmaster Open will be held at 3:15 p.m. at the Bass Pro Shops in East Ridge, Tenn.