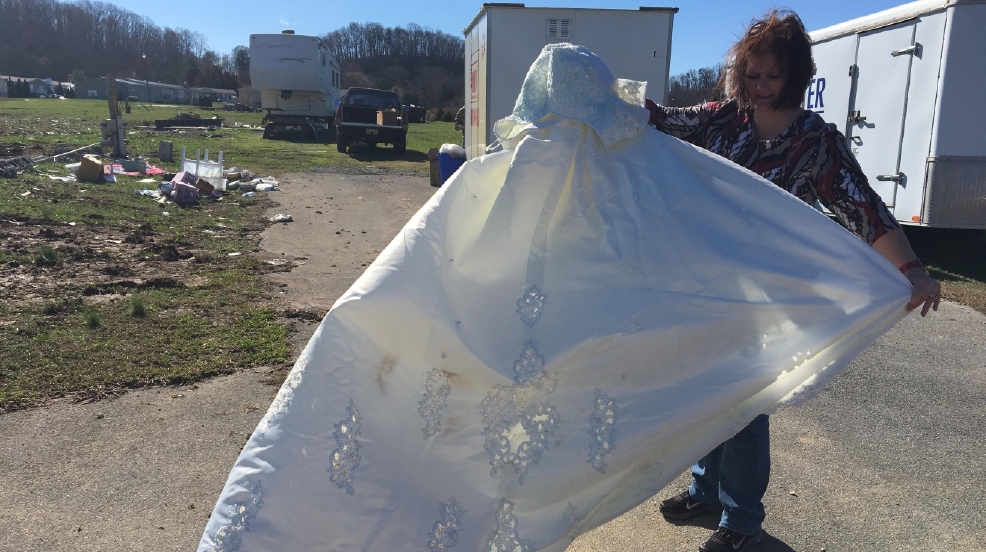 Residents of Athens are still cleaning up their community three months after deadly tornadoes ripped through the area.

Debris is all over Russell Repkie's 26 acres.

His home was right in the path of that EF2 tornado.

Russell says some of the debris is from his own house but the rest came from miles away.

"Wood, tin, papers, this and that," Russell told NewsChannel 9 he's slowly been clearing away different items for months now.

However, on Thursday he found something unexpected.

At first, he "thought it was probably just some more tin off somebody's roof."

Russell and his wife went out of their way to check out the shiny material that caught his eye.

It wasn't the siding or shingles he'd become accustom to finding.

Instead, he discovered a golden box.

" I lift it up and it's heavy. I thought, there's something in there and she opens it up and says it's somebody's wedding dress," Repkie said.

Russell posted a picture of the box on Facebook.

In just two hours, Denise Ferguson contacted Repkie saying the dress was hers.

"She sent us a picture and my wife and I said at the same time 'that's it,'" Repkie said.

Denise's house was destroyed in the tornado.

Her and her husband thought they lost everything.

She thought her wedding dress was gone for good.

But on Saturday morning, Denise met Russell for the first time, in front of what's left of her house.

After a few pleasentries, Russell reached into his pickup to retrieve a golden box.

Upon seeing her dress, an emotional Denise was in shock.

"That's it for sure, I can't believe it really," she said as she choked up.

The dress is a reminder of her almost 18 year marriage full of what she calls "good, good memories."

Despite living less than a mile apart, Denise and Russell didn't know each other before the reunion.

Along with her wedding dress, Russell also returned Denise's faith in her community.

"There are still people in this world that want to help other people," she said.

Russell was just happy he could help, "she's lost everything but at least she's got something of her memories with her life together with her husband,"