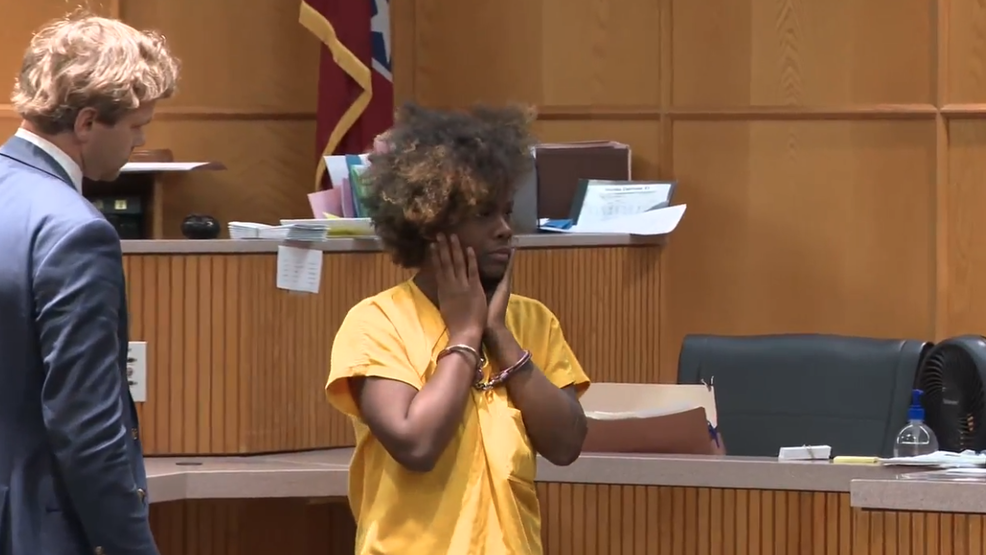 Tybresha Sexton appears in court on October 4th. According to an arrest report, Chattanooga Police responded to the Bayberry Apartments Sunday evening after several people alerted them to the video. (Image: WTVC)

Charges have been dropped against Tybresha Sexton, the woman whose Facebook Live video showing her holding her newborn over her head while she was smoking went viral two weeks ago.

At a hearing in Hamilton County Criminal Court Tuesday morning, prosecutors recommended to Judge Alex McVeigh that charges against Sexton be dismissed.

Assistant District Attorney Ben Boyer says while it may be "disturbing," they would have a problem meeting the burden of proving there was neglect. They told Judge McVeigh they would no longer be pursuing charges in the case.

"I can see that because she did not hit the child," said Beverley Edmonds, who lives in the Bayberry Apartments where Sexton also lives.

Edmonds knows the challenges that come with raising children. She watches her great-grandson everyday at Bayberry Apartments.

She says while Sexton's treatment of her child may not be criminal, her actions as a mother are inexcusable.

"You don't drink or smoke, or do whatever you're going to do around a small infant," said Edmonds.

On Tuesday, we learned the mother is getting help at the Helen Ross McNabb center, but had decreased her medicine when she was pregnant.

Assistant District Attorney Ben Boyer said Tuesday that the newborn's grandmother did not have custody of the child before the event, but that she now has legal custody until at least January.

Sexton will be released from the Silverdale Workhouse later on Tuesday.

Watch our livestream of the hearing below:

Police reports say the video lasted 30 minutes and showed Sexton shaking the infant. An officer said Sexton also had a “heavy odor of alcohol on her breath and made irrational statements.”

According to an arrest report, Chattanooga Police responded to the Bayberry Apartments Sunday evening after several people alerted them to the video.

According to the affidavit, Sexton told police the reports weren't true and allowed an officer to check the infant.

The officer says Sexton had a heavy odor of alcohol on her breath and made irrational statements.

The report says several neighbors then came to the apartment and showed police clips of the 30 minute video where Sexton shook the infant, picked her up by the arm, and dropped her.

According to the affidavit Sexton loudly said she, "didn't want that f***in' baby anyway," and she "already told them that."

This story will be updated as we get new information.