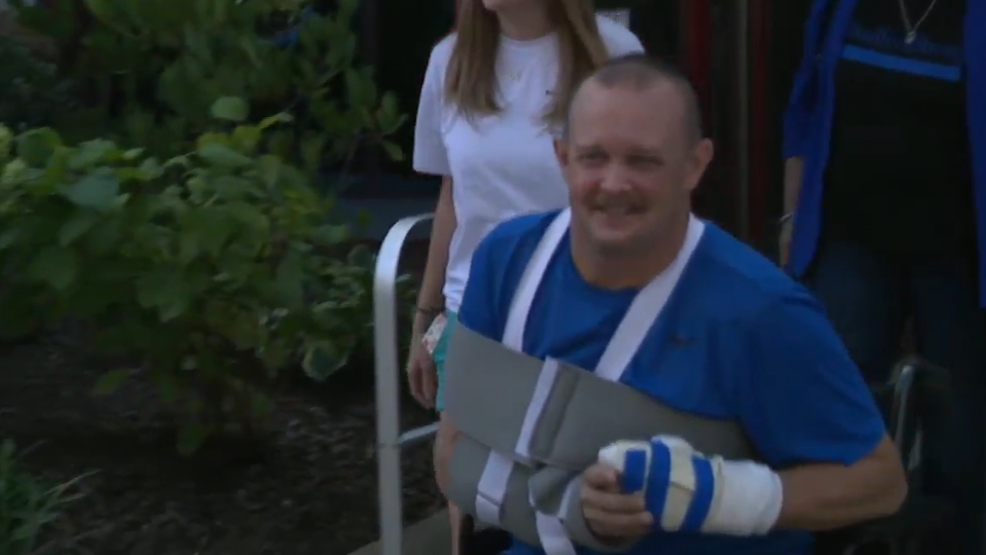 Dade County turned out to welcome home an officer who was badly injured in the line of duty on Wednesday.

Major Tommy Bradford was discharged from a Chattanooga hospital Wednesday morning and headed to his home for the first time in several weeks. The look on his and his family's faces was priceless.

Bradford was badly injured in the line of duty, losing his leg while laying spike strips to try to stop a chase suspect. That suspect remains in custody at the Walker County Jail, and she currently has no court date set.

Major Bradford's wife, Mary Ann, has been with him throughout his entire time in the hospital and rehabilitation at Siskin. She knew he would not give up.

"I always knew he was a strong man. Just the will power he's had to do the rehabilitation, the physical therapy. He's not stopped. He's not slowed down"

On his way home, he was surprised by a throng of supporters lining the roads with signs, flags, and lots of big smiles.

He rode by every school on his way back into town.

Students, teachers, and staff cheered him on as Bradford waved back at them.

"There's something about knowing who he is, where he's come from and his dedication to the community and Christ that he was gonna pull through," said Kim Robinson. "His family is so amazing and we are glad his is coming home today. "

We were live on Facebook as students lined the road to welcome him home. The Dade County Sheriff's Department planned the welcome home as a surprise to Bradford, who had no idea this would happen.

Major Bradford wrote a letter last week saying he will continue to rehab and get back to serving the Dade County community.

He said he considered getting out of law enforcement, but the tremendous support helped him make the decision to stay with the force in some capacity.

Watch our live coverage in our Midday newscast below:

Sheriff Ray Cross thanked the community for turning out:

A Facebook post says, "Words can never express the gratitude we have, for the large amount of community support we saw today during Major Bradford's homecoming.

Dade county is by far the best place on earth to work and live.

Thank you from the bottom of all of our hearts here at the Dade County Sheriff's Office!!