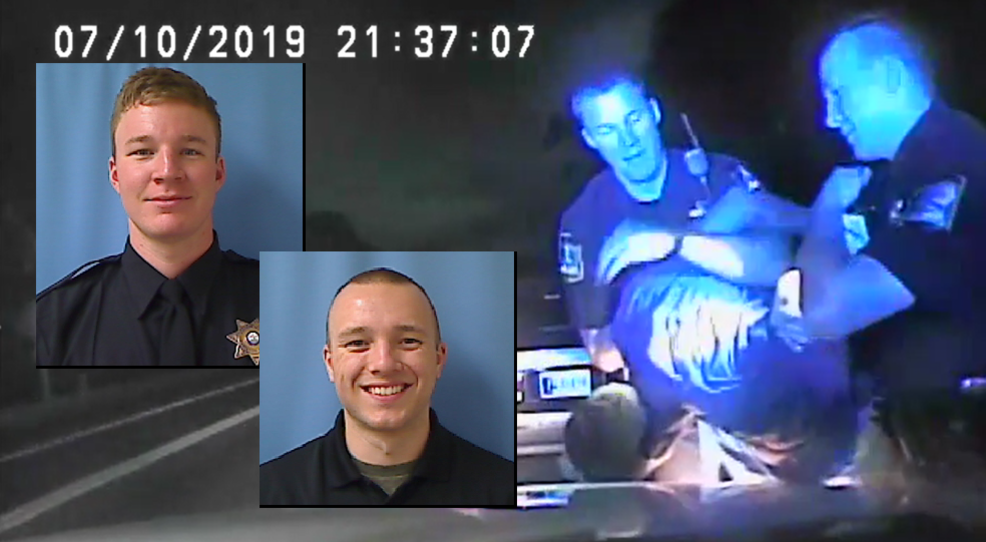 (Left to right) HCSO deputies Bobby Brewer and Daniel Wilkey who were placed administrative leave are now facing a lawsuit from the man they stopped and strip-searched at the side of the road, along with the woman who was driving the car at the time of the July incident. (Images: HCSO, Hamilton Co. DA's Office)

Two Hamilton County deputies who were placed administrative leave are now facing a lawsuit from the man they stopped and strip-searched at the side of the road, along with the woman who was driving the car at the time of the July incident.

In the video (watch it here), Hamilton County Deputies Daniel Wilkey and Bobby Brewer can be seen hitting a man in handcuffs. According to an arrest report written by deputies, James Mitchell was combative against officers at the traffic stop in Soddy-Daisy.

The lawsuit says on July 10th, Mitchell was in a car driven by Latisha Shana Menifee.

The deputies stopped Meniffee on what the lawsuit calls "false claims" of a window tint violation.

It says Deputy Wilkey told the pair that he could smell marijuana coming from the car as he followed the car.

Deputy Brewer then arrived on the scene and ordered Mitchell from the vehicle. The lawsuit says Deputy Wilkey pulled Menifee from the car "without justification," and later put her in handcuffs.

Mitchell told the officers that he had marijuana on him. The deputies then put handcuffs on him.

The lawsuit says, "Wilkey then began to grab James' genitals. When James told Wilkey that (he) had an untreated and large hernia and that Wilkey's actions were causing (him) pain, Brewer and Wilkey jerked James' arms high above his back, and slammed James face-down onto the hot engine hood, causing injury...."

The lawsuit says the deputies then beat Mitchell with "fists, knees, and feet," and slammed him to the ground. It was then, according to the lawsuit, that they removed his pants and shoes, while continuing to beat him.

Hamilton County Sheriff Jim Hammond disputes this detail, saying a week after the incident that he does not believe the deputies conducted the body cavity search.

The lawsuit says Menifee watched all this happen in horror, and caused her to fear that she would be treated the same way. She also says she was afraid the deputies would shoot and kill Mitchell.

The deputies put Mitchell in the patrol car, and took the cuffs off of Menifee and "told her that she did not see anything," and asked her to leave, according to the lawsuit.

The lawsuit says after he was booked at the Hamilton County Jail, Mitchell was treated for several injuries. It also claims Deputy Wilkey "unlawfully seized cash" from him.

A medical examination later revealed suffered "tearing in his anus, and multiple contusions," along with an aggravation of a hernia that eventually required surgery, according to the lawsuit.

The lawsuit goes on to cite several examples of reported law enforcement brutality, saying that Hamilton County fostered a culture of corruption that permitted the two deputies to behave the way it claims they did.

Read the full lawsuit below:

In light of this incident, the Hamilton County District Attorney's office created a hotline for citizens to share excessive force complaints.