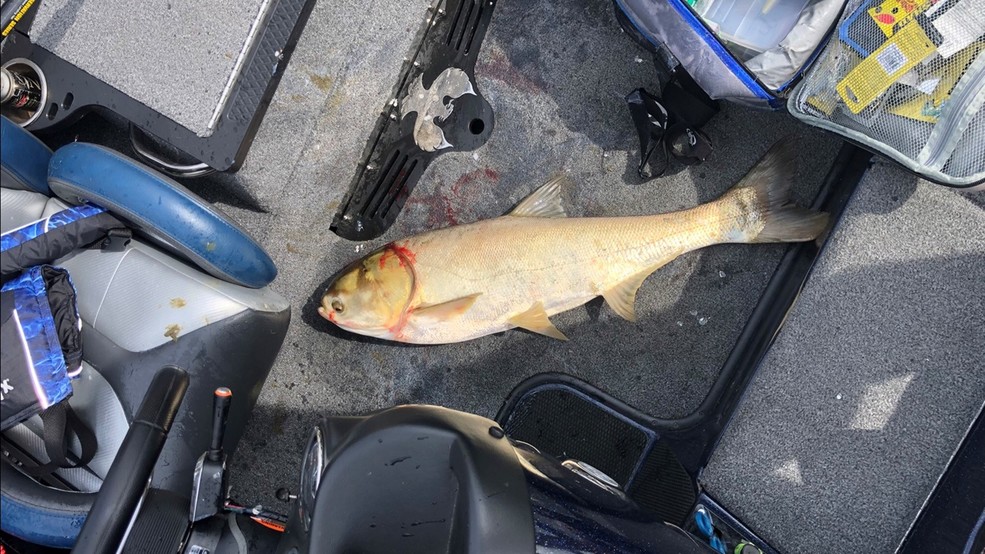 The Tennessee Wildlife Resource Agency received a report on Jan. 10 that a silver carp was captured on Chickamauga Lake back in October. (Image: TWRA)

Something is swimming in Chickamauga Lake that should not be there at all.

The Tennessee Wildlife Resource Agency received a report on Jan. 10 that a silver carp was captured on Chickamauga Lake back in October.

Everything looks in place on Chickamauga Lake.

But something underneath the surface is disrupting this ecosystem.

According to outdoor experts, Asian carp, an invasive species, is in Chickamauga Lake.

The situation is not nearly as bad as carp caught on camera by Tennessee Aquarium experts at Lake Barkley Dam in Kentucky.

But Thom Demas with the Tennessee Aquarium says there is cause for concern.

"I don't want to throw my hands up and say things are going to get terrible, because there's always hope and optimism. but I think as time goes forward its going to get worse, and worse now that it seems they're here," said Demas.

They also compete with native species of fish for food and space.

"The likelihood of them out competing the native fish is probably very great," said Demas.

News of this invasive carp being found in Chickamauga Lake is sending shock waves throughout the fishing community.

"Right now, they're putting a lot of hope in commercial fisherman. Hoping they can catch as many of them as they can," said Simms.

While the TWRA has only received one report of this carp in Chickamauga Lake, experts say if there's one, there's probably more where that came from.

If there's any good news, Demas and Simms say the fish is tasty.

"They're actually quite good. The meat is white, light, a little flaky," said Demas.

You can find out more about silver carp and other invasive species on the TWRA's website here.

If you spot or catch Asian carp, the TWRA wants you to report it.

Reports can be made by calling the nearest TWRA regional office, or by emailing ANS.TWRA@tn.gov.