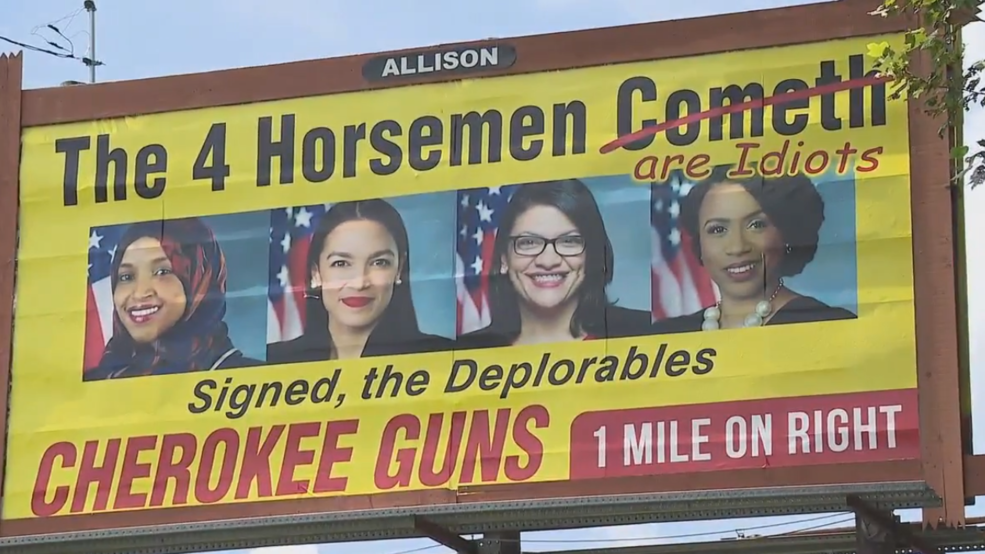 A controversial billboard advertisement depicting four Congresswomen as the Four Horsemen is coming down - but not without a fight.

On Wednesday, Allison Outdoor Advertising announced they would be removing the sign, which depicts Rep. Ilhan Omar of Minnesota, Rep. Alexandria Ocasio-Cortez of New York, Rep. Rashida Tlaib of Michigan, and Rep. Ayanna Pressley of Massachusetts as the Four Horsemen, and calls them idiots.

Doc from Cherokee Guns in Murphy, North Carolina helped create the billboard, which he said had only been up for a few days. Doc told us Thursday that it achieved its purpose. All the same, he says he's standing firm in his beliefs.

In a handwritten statement, he said...

"The billboard has been driving business into our store. This was the main goal, as what any billboard is for! We give no apologies as we believe in our message (as many others do). The bottom line - this country will never be a Socialist country. I think President Trump will agree!"

We called the advertising company to ask them why they made the decision.

They responded by saying, "We're not in the business of upsetting people, and it's a shame it has come to this."

Bill Owens is from Murphy, and came here to take pictures of the billboard Thursday. He's in full support of it.

"It's a classic picture. I think it should stay," says Owens. "I think it's wrong to take it down. The other side can have freedom of speech, and we can't, apparently."

Asheville resident Patrick Miljour says the message is divisive, and doesn't speak to the ideals of the country.

"This isn't cool," says Miljour, pointing at the billboard. "You know, those people are American. I'm American, you're American."

We were at the gun store earlier this week, when phones rang off the hook, and Doc taking them. Many of the calls praised the shop's owners for putting up the billboard.

Doc says he's also had tons of people call to threaten him, his workers, and his family - raising the question of how much fear this is causing in the community, even after the advertising company said they would take it down.

"If it was me, I'd take the threats because they're gonna happen one way or another," Owens says. "I would not take it down if i was him."

One couple we spoke with traveled all the way from LaFayette, Georgia in support of the sign, and said removing it is a violation of the First Amendment rights.

They changed their mind about appearing on camera, however, saying they were afraid Antifa will "burn their house down."

While others weren't afraid to speak their minds.

"This right here -- that is to divide us," Miljour said pointing at the billboard. "And that is not cool."

Stepping into the actual gun shop at Cherokee Guns, it was very busy Thursday - people coming in and out, purchasing guns. According to Doc, it looked like business was at a high after the billboard, which he said was their purpose in the first place.

Doc says if need be, they will fight and they will sue the advertising company to keep the billboard up in order to stand for their beliefs.