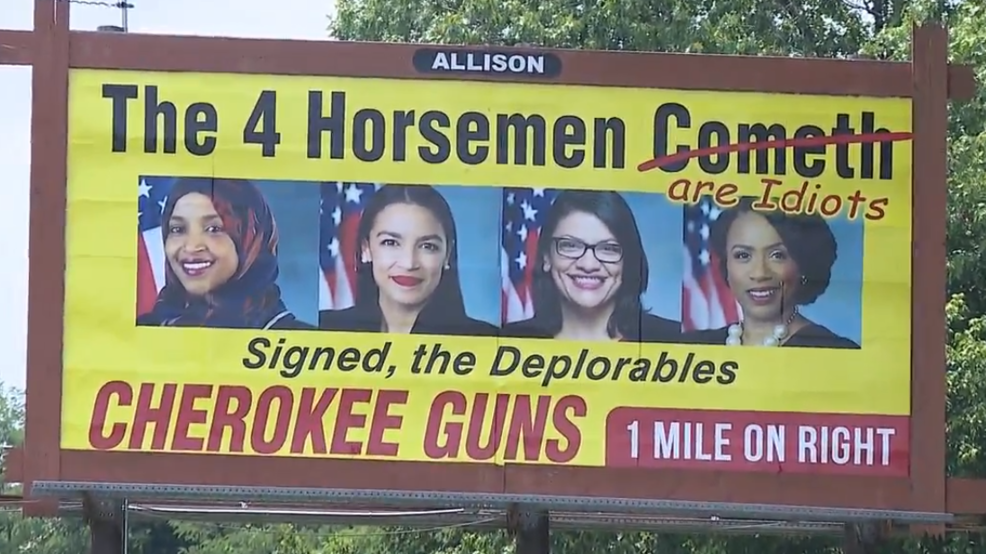 With a new billboard, a gun shop in Murphy, North Carolina is weighing in on a recent dispute between President Donald Trump and four members of Congress.

The message is starting conversations around the country - and the man who placed the ad says even though it's only been up for a few days, it's already brought him more business.

The sign says above their photos, "The 4 Horsemen Cometh are idiots," and below says "Signed, the Deplorables."

The store's owners say the billboard has been so successful that they have started selling a bumper sticker version of it.

A post on Cherokee Guns' Facebook page from Monday says "Alright my fellow Infidels for Trump...due to OVERWHELMING demand...you may come by the shop (next week) and get your very own FOUR HORSEMEN COMETH STICKER...simple...eat a piece of bacon...tell us you're voting for Trump in 2020...then get your limited edition bumper sticker!! (While supplies last!) Snowflakes and Liberals are not eligible...sorry..."

All four congresswomen, all Democrats, have been critical of President Trump, and recently, President Trump told them to return to the "crime infested places from which they came," in a series of tweets that were described by many as racist. The congresswomen later held a news conference to advise everyone to "ignore his bait."

Unfazed by the criticism, President Trump continued his attacks on the congresswomen. And those attacks resonated with those in Trump's base, including the owners of Cherokee Guns, who have also depicted President Trump on another recent billboard:

Comments on Cherokee Guns' Facebook page about the recent billboard have generally been supportive, with one saying "I'm with Cherokee Guns 100 percent." Not everyone is pleased, however, with one commenter saying "I will pray for your salvation and forgiveness and find peace in the knowledge that God will judge you for who you are and what you do. In the mean time, I will report your post in hopes that you will be removed from Facebook altogether."

We sent a crew in Murphy Tuesday to interview Cherokee Guns owners, and talk with others in the county about what they think of the billboard.

Phones were ringing off the hook at Cherokee Guns today, with many praising the shop's owners for putting up the billboard.

"If we were still in North Carolina, we would have to make a trip to come purchase some firearms from these guys and support them, because that's amazing," said one caller.

Others, like resident Randy Barnett, feel the need to speak out against the ad.

"I was just appalled by it. I've lived here all my life and I think it's divisive," says Barnett, "I hope it's not who we represent now."

Cherokee Guns owner Doc says race has nothing to do with his shop's advertisement.

Instead, he says it's meant to support President Trump, and to advocate against socialism.

"We don't like their message of turning this country into a socialist country," says Doc. "That's the message, nothing more to read than that."

"Well, they're calling us racist. I don't care if it's four white women, four white guys who have their view - they'd be on the billboard."

Cherokee Guns is standing behind their statement.

The billboard is drawing national attention as well.

The Coalition to Stop Gun Violence shared the post on their own Facebook page, saying "Disgusting anti-government violent rhetoric from Cherokee Guns in North Carolina. Threats against members of Congress, particularly minority members are (upward-trend emoji) and it is driven by the president’s racial rhetoric This is dangerous!!!"