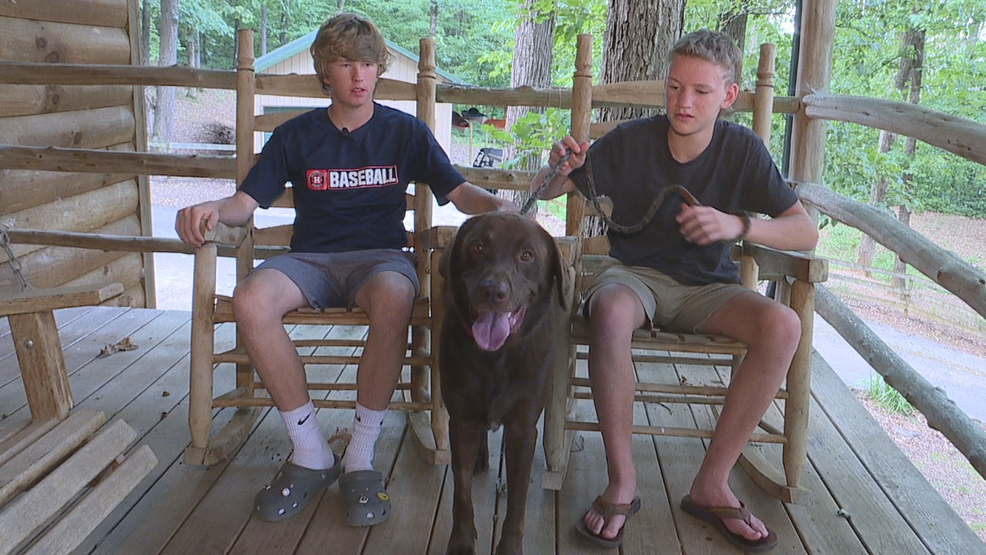 It's not unusual when a human saves the life of a beloved pet. But what about the other way around?

Classmates Seth Huskins and Garrison May were picking vegetables for Seth's grandparents on a hot June afternoon, when suddenly the leaves by Garrison's feet rustled. A copperhead snake slivered onto garrison's foot.

"I went into panic mode," Seth said. In less than a second, Seth's chocolate lab Baker sprung into action.

"I jumped up, natural instinct," Garrison said. "I thought it kinda jerked at me. Right before it jerked at me, Baker grabbed it."

Seeing his friend in trouble, Baker pounced on the snake.

" [Baker] started wrestling with it on the ground, slinging it back and forth, and then he threw it up in the air," Seth said.

As Seth watched his pup pounce on the copperhead, he was now scared for his friend and his dog.

"He wouldn't take his eyes off of it. And I didn't grab him or anything, I just said Baker, come here, and he walked right to me," Seth said.

Seth and Garrison thought all injuries had been avoided once they cleared there area where they snake had been. But the snake had actually lunged up at Baker and bit his lip--leaving two bite marks on the inside of his mouth. It was not until the next day that Baker's owners realized he had been bitten, after the side of Baker's face had swelled up. The Huskins took Baker to the Animal Clinic Inc. in Chattanooga.

Dr. Courtney Griffin, a veterinarian at the clinic, says Baker was lucky his family noticed his symptoms.

"If a dog has been bitten by an adult copperhead, they may not be envenomated at all," Dr. Griffin said. "In which case, the swelling can be pretty mild, and so in those cases, the owner might not notice."

Dr. Griffin added that the venom from baby copperheads is more life threatening, as they are too young to control the amount of venom they release.

A few weeks have passed since Baker's heroic save, and it looks like he will make a full recovery. The only lingering battle scars he has are the two marks on the inside of his mouth, and a droopy lip.

Seth and Garrison feel lucky to have a hero like Baker for a friend.

"I feel like he would've done it for anybody, he's a very good dog," Seth said.