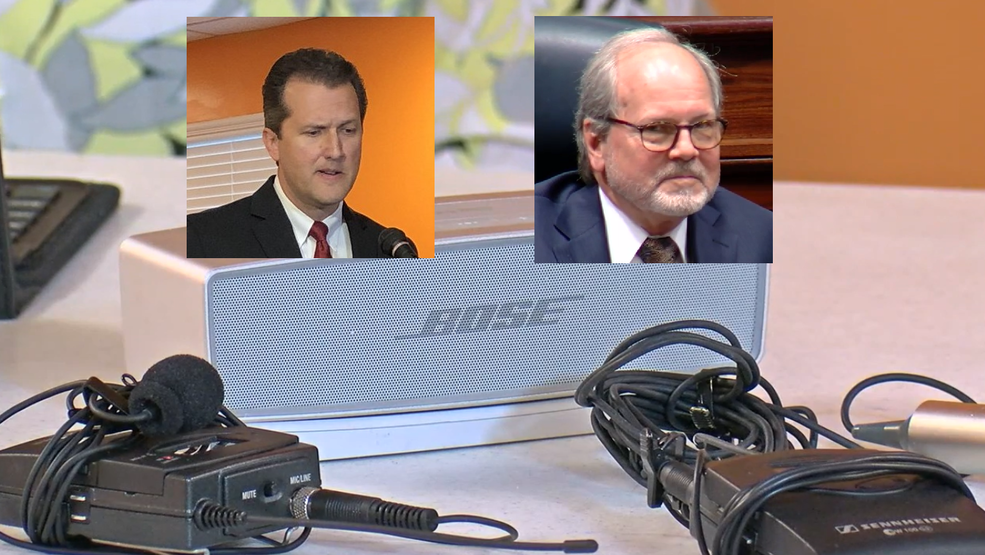 East Ridge Mayor Brent Lambert held a news conference Monday in which he says his opponent for the District 8 Hamilton County Commission seat, current incumbent Tim Boyd, "tried to bully me, and tried to bully my family."

Lambert played audio recordings of conversations he had with Boyd that he says prove Boyd was trying to intimidate him from running for his seat. Boyd was later indicted by a Hamilton County Grand Jury on extortion charges.

At one point in the recordings, Lambert asks "what do you want me to do?" and Boyd responds, “Instead of continuing this campaign as an opponent against me, I’d prefer for you to drop out of the race.”

We streamed the full news conference on Facebook, in which he played the telephone conversations.

On a February 20th recording, Boyd tells Lambert, "“To me Brent it’s not worth it to you. It’s a little county commission job. You’re doing good things in East Ridge and I want to work with you in East Ridge.” And he says, “It’s the timing, when you connect all the dots and put the story together it just leaves the perception that Brent Lambert is an extremely unethical businessman and that is the point that my team will drive him for the next two months."

The tapes have Boyd urging Lambert to drop out of the race, with him promising to retire in four years: "“You pull out. It’s over. I got no incentive to hurt you. I told you yesterday, you pull out, in four years, I’m not going for a commission seat again. I’m retiring.”

Lambert responds, "The hang up that I have is I don’t feel like I’ve done anything wrong," to which Boyd repliese, “You pull out and Ken will turn over everything we have and show it to you.”

Boyd was booked into Hamilton County Jail and quickly released on bond on Wednesday morning.

“Political candidate Brent Lambert issued a press release Friday threatening Tim Boyd that he will release a secretly recorded conversation today in order to gain political advantage in an election. Mr. Lambert is committing the same act today that he complained of last week.

“If Mr. Lambert really believes he is the victim of a crime, as he claims to be, it is curious business for him to hold a press conference today to release evidence, as he announced he intends to do. As a political candidate, Lambert is holding a press conference today, he says, to release a conversation that he secretly recorded of a political opponent. Puzzlingly, Mr. Lambert initiated the call to Commissioner Tim Boyd for the purpose of recording him. This act by Mr. Lambert, followed by an indictment, and now followed by his announcement that he will release evidence in a pending criminal case, is a mockery of our legal system. Mr. Lambert and those individuals who are helping him with his threats against Commissioner Tim Boyd should be held accountable for their actions.

Davis Lundy, a friend of Commissioner Boyd and acting as his spokesman, released the following statement to us Monday evening: (Reading this article on our mobile app? Tap here to open an external browser and read the statement)