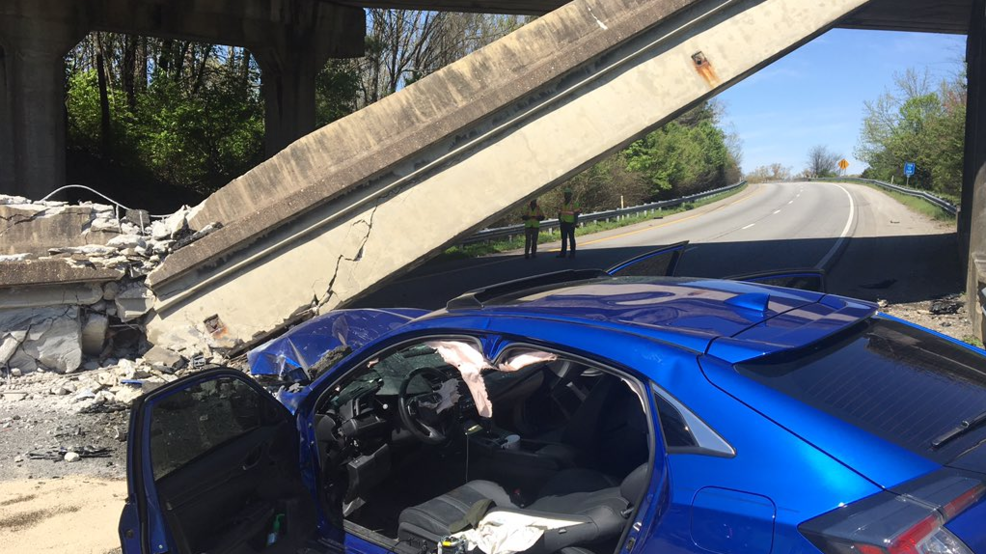 This photo from the Tennessee Highway Patrol shows the damage to Ryan Hixon's vehicle. His attorney says he continues to suffer physically & emotionally from the April 1st incident.

A second claim has been filed after the 1-75 overpass collapse accident.

Laura Hixon, like her husband Ryan Hixson, is suing the Tennessee Department of Transportation (TDOT) for $300,000 in damages.

The Hixons had their first baby only twelve days before the bridge collapsed on April 1st.

The claim says, although Laura was not in the car, she still incurred great losses.

Though she was not in the vehicle, she spent the first months of the child's life caring for the child and her husband. For many weeks, Mr. Hixon could not hold his infant, or assist his wife in caring for the child. Her damages are loss of consortium in nature.

As with her husband's case, the Division of Claims and Risk Management has turned the claim over to the State Attorney General’s Office for investigation due to the amount of damages Laura is suing for.

TDOT spokeswoman Jennifer Flynn clarified the state has a cap on any claims filed against TDOT for damages, according to T.C.A. 9-8-307(e).

The couple is suing for $600,000 combined, the most allowed for two individual claims.

Hixon was driving his car on I-75 and happened to be in the wrong place at the wrong time. A portion of the overpass near the I-24 split collapsed, damaging his car and causing severe injuries.

Now, Hixon, through his attorney, is suing TDOT for $300,000 in damages. The claim says TDOT "had notice" of the poor condition the overpass barrier was in, saying it logged a report of cracks in the overpass on March 29th, three days before the crash. The claim says TDOT used traffic cameras to look at the bridge and dispatched a HELP Supervisor to the area to look at the bridge. TDOT later said in a news conference that inspectors determined that it was grout, not concrete, that was seen falling from the bridge.

The claim continues, "Unfortunately, despite almost three (3) days' notice of problems with the overpass, TDOT failed to make a complete and comprehensive inspection, and to warn motorists of the impeding danger. Had TDOT taken the warnings seriously and inspected and/or closed the bridge, it would have prevented this unfortunate incident from occurring."

The claim for damages says Hixon endured several physical injuries, including "a cracked sternum and severe internal bleeding. He has had to undergo multiple surgeries. He has had a bowel resection which resulted in a scar from his stomach up to his chest. He has had surgery on his eye socket and still has double vision and dizziness. Additionally, he suffers from neck, knee and back pain."

And the claim says Hixon's damages aren't just physical. It says he has more than $100,000 in medical bills, which he is struggling to pay. It says Hixon "is a responsible adult and it is extremely upsetting to him to see medical bills marked "Final Notice".

It also notes Hixon had recently become a father, less than two weeks before the accident. The claim says that for many weeks, his injuries deprived him of the ability to hold his new child, and help his wife provide proper care. Hixon's attorney says he's filing a separate loss of consortium claim on behalf of Hixson's wife.

The claim says Hixon had just started work as a driver for FedEx, but says his injuries and further medical care have prevented him from working, "due to the negligence of TDOT," and that it's not clear when he will be able to get back on the job.

NewsChannel 9 has reached out to TDOT for their response to this claim. We are waiting to hear back.

This is a developing story. Depend on us to keep you posted with new developments as we learn more.